The lesson plans, ideas, and resources in this "General" forum about Jesus' Birth tend to cover the "entire" story of Jesus' birth, rather than focusing on individual parts or persons in it. Check our other Advent story forums for lessons that are more specific to particular persons or episodes, such as angels, Mary, shepherds, Magi, etc. Don't forget the Writing Team's extra creative Advent lesson sets too!

Please post unique ideas and quality resources. Do not post cheesy uninspired crafts. The web is already (too) full of those. Think "unique" or something that really stands out.

If you want something really unique and creative, look at the Advent Art Workshops written by the Writing Team. They are linked at the top of the Advent forum. 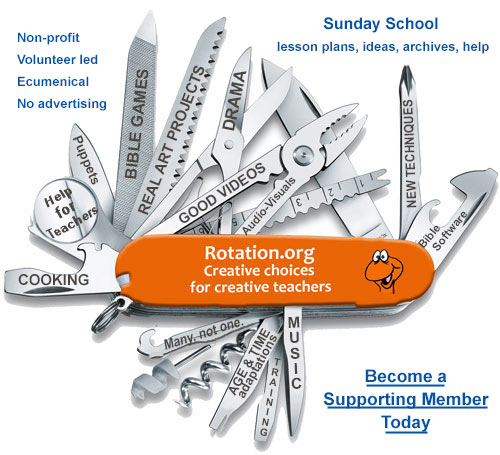 The following lesson idea was based on one suggested by member Catherine Bengson from All Shepherds Church.

Comparing the Secular Christmas Message with the Sacred

Bring in a variety of Christmas cards, including many secular "Season Greetings" cards.  After some discussion/definitions/examples, have the kids "vote" by walking to one of three areas of the room which you have labeled:

Area 3: Cards that look secular but are based on a Christian message/understanding.   ("Peace on earth" for example.)

*Part of your lesson is to teach the word and concept of "secular" vs "sacred." Encourage debate.

Throw in a couple of TV SHOW "cards" the kids are probably familiar with, and have them vote to decide whether it's secular or sacred.   Frosty, Rudolph, Charlie Brown Christmas.

Try not to make this a "Christ in Christmas" culture war thing. It's not. God has always been present in the secular, quietly working for the good of all. "Secular" does not mean bad or devoid of God.

One for the family, another to share the message.

I came across this easy and good looking "Manger Ornament" over at trophyw.blogspot.  One of the reasons I like it as a Christmas craft, is that it is likely to last in the family's ornament box. So many "kids crafts" disintegrate in a year or two. I also like the blogger's suggestion to "knock out a bunch of them to share."

Her instructions are copied below, and those are literally all she wrote, noting that the project is pretty simple. The craft star and ball (baby's head) are easily found at craft stories, as is the wreath and straw. Image used with permission. Here is a blog with instructions on how to make a nativity set (creche scene) three different ways using the provide template of the characters in the story and attaching them to toilet paper tubes, river stones, or wood blocks.

There is not a great deal of art involved in this project, but it would be great as part of a storytelling workshop where the children then use the pieces they created to tell the story of Jesus' birth.

The above nativity reminds me of something we did about 10 years ago for our "Family Advent Night." We made a nativity in a box for each family. I ordered boxes from U-line (the kind that have the flap that folds into the front. We used toilet paper rolls for the base of the figures and used paper, markers and assorted colored and printed napkins to dress the figures. The prep was pretty extensive, but it was worth it! It was one of the more popular activities we have done for Advent. I still hear from families that they have their nativity box and put it out each year. It was nice that everything fit into the box for storage.

Directions (including photos) are attached.

Note: The dimensions for the paper for the clothing are included in the instructions. The head drapes were simply half circles cut from napkins. The center of the straight edge of the napkin semi-circle is glued to the top of the figure's face and then the straight edges drape on either side of the face. The curved edge hangs to the back. You can fold the napkins easily and cut your semi-circle so that the drape will fall about three quarters of the way down the figure in the back.)