Art Lessons, Ideas, Activities, and Resources for the Prodigal Son

The following lesson plan is copied from CreativeCarol's COMPLETE Prodigal Son lesson set found in this forum.  The Prodigal Son wire sculpture project was first described by Neil MacQueen in our original lesson exchange back in the late '90s. It has since been copied, revised, and improved upon by many others.

In many ways, the Prodigal Son wire sculpture art project and lesson embody all that an Art Workshop aspires to:

Make wire (or foil) sculptures of the father and son posed at the moment of forgiveness. Greet your students warmly, welcoming them to the Art Workshop. Introduce yourself and any other adults.

Say: Let’s start with prayer. Ask for any prayer requests. Ask if anyone would like to lead the group in prayer. Use the Lord’s Prayer as the ending. A suggestion: Thank you God for your gift of forgiveness and love. Thank you for sending us Jesus and for the wonderful parables that he told us that help us understand your love for us. (End with the Lord’s Prayer) Amen.”

Say: Today we’ll be learning about a parable Jesus told, called “the Prodigal Son.”
[In later weeks of the Rotation ask the class what story we are studying.]

Ask: Who can tell me what a parable is?  (a parable is a story that teaches something)
Does anyone know what this parable teaches? (In the 1st week the kids aren’t likely to know; that’s ok, ask anyway as an introduction to what it does teach.)

Say: This parable is called the “Prodigal Son.” It is also sometimes called “The Parable of the Lost Son” or the “Parable of the Loving Father.” It teaches us that God offers us unearned love; we call this “grace.” Our art activity today will be to make sculptures from wire, sculptures that illustrate grace. Let’s start by finding our story in the Bible.

Ask:  In what Gospel do we find our story? (Luke)

Do: Distribute Bibles. Have everyone find Luke, chapter 15, verse 11.
Ask students to pay attention to how people may be feeling in this story.
Have students take turns reading verses 11-19.

Say: Our art project today will be to shape wire sculptures of people that reflect the emotions in the father and his son. Before we start our creations, let’s talk a little about what’s called “body language."

Say: Because we have beautiful artwork represented in our Bible timeline mural, I want us to go out and look at the pictures, looking for emotions in the depictions of people. I have certain pictures I want you to look at to notice emotions.Head out to the timeline: Remind students not to touch the artwork.  Have them notice: 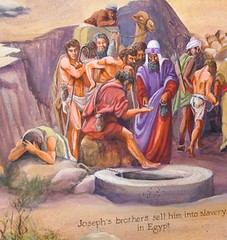 Back in the classroom

Say: We are going to make wire sculptures representing the father and his son in our story. I will give each of you some wire, and then we can go over together the process for making a person out of wire.Give each student the wire that has been formed into a loop. Have them do each of the following steps for making a wire person.

The students will now have a basic figure.

Once they are finished, have them attach the feet of the sculpture to the base. [If using plywood, then you should do the stapling.] Have the students create another smaller sculpture of the son. Don’t attach him yet. When everyone is ready, hold open a Bible…
Say:  So far in our story, the younger son had left his home with money in his pockets.
Ask:  How do you suppose you’d position the figures at this point in the story? (allow them to do so)

Say: Then the younger son runs out of money and is forced to get a job feeding pigs.

Ask:  Who can tell me why a job working with pigs was despicable to a Jewish person?

Say: Jesus was Jewish and he was telling this story to other people who were Jewish. Jews considered pigs an “unclean” animal, which meant that they could not be eaten. Ask:  What happened next in our story?

Say: That’s right, he came to his senses! He thought, “I’ll go back home to my father. Because of my poor choices, I don’t deserve to be called his son. But maybe my father will let me be a servant, to earn money for food.”Ask:  How would your younger son figure (the one that’s not attached) look at this point in our story?
Is he expecting his father to be happy to see him?

Say: He probably expected that his father would say something like, “you’re a bad son. You’ve wasted all your money. You’re not welcome in this family anymore!” Read Luke 15:20b-24 to the students using the Adventure Bible.Ask:  How did the father react when he saw his son coming home?
How would you position your father sculpture (the one attached to the base) now?
The father was offering forgiveness. How does forgiveness look?
How do you show humility?

Once the kids have positioned their sculptures hand out the shorter pieces of wire, which can be used to wrap around and embellish their sculpture. Ask the Shepherd to attach their second sculpture to their base when they’re ready – placing it opposite the “father.”Discussion: (while the students are working)

Say: Recall that a parable is a story that teaches us something.

Ask:  What is the reason that Jesus told this parable? What was his message?
Say: Verse 20 says, “But while he was still a long way off, his father saw him and was filled with compassion for him.” This tells us that this father was waiting and watching for his son. Just like this father, God waits and watches for us when we turn away from him. Your sculptures show grace in action. God offers us grace – forgiveness even when we don’t deserve it. Say: There is more to this parable. Remember that this father had two sons. There is an older son who has an opinion about what his father does. Listen.Hold a copy of the paraphrase in an open Bible while you read the rest of the story. (It is suggested that you hold your papers inside a Bible so that kids understand that you are reading the words from the Bible.)Ask:  How does the older brother feel about his younger brother?
Would you be able to accept the younger brother – to offer forgiveness?
Who is someone around you who needs forgiveness?
If a friend does something wrong and asks for your forgiveness, do you suppose you could be forgiving and be friends again?

Have everyone read together the key Bible verse. Say: God is willing to forgive. All of heaven celebrates when we ask for forgiveness. The question is, are we willing to forgive others as God forgives us?When you take your wire figures home, show others in your family, and share the story of grace and forgiveness.Closing:

Have them label their sculpture with their name and a title such as “The Prodigal Son – Moment of Forgiveness” or include the key Bible verse.

When the older son returned from working in the field, he learned that his father had ordered a feast to celebrate the return of his brother. He was angry! Celebrate? This was the brother who had thrown away all his money!
The older brother complained to his father, saying that he had followed all the rules and worked without ever getting a reward.
The father answered that the older son would get everything that belonged to the father. He said…
[Refer to the key verse written on the easel.]
But we had to celebrate and be glad because this brother of yours was dead and is alive again; he was lost and is found. 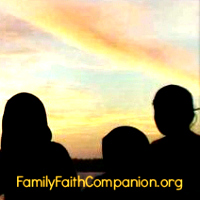 Other resources: Visit Carol's blog – where we encourage parents to continue the learning at home.

(Conflict of Interest Disclosure: None, Carol does not make any money from her blog.)

Here are some rough diagrams and a couple of pictures of completed projects done by our kids. Thanks, Neil for the great idea and Carol for the great lesson. Use a STAPLE GUN or screws to fasten the sculptures to the base.

You can wrap additional wire around the torso and legs of the characters to add dimension.

Some students can make multiple characters, including "The Pose of the Older Brother".

Additionally, you can have "kid models" hold a pose in front of the class to show forgiveness or "looking for your son" to the class, who then shapes their figure.

Moved here by a Volunteer Moderator from the HELP FORUM.

I'm looking for a prodigal son art idea. Not interested in wire sculpture - we've used it recently in another lesson, so we want something different.  Any other ideas out there?

I SURE hope our Artsy people see this, but thought I'd take a shot at it. Sometimes I like to look at the "props" in a story for inspiration, and this story has one that can turn into something very cool to go home:

"Shoes for his feet"

The shoes here are most likely "fine" shoes signifying his restored status in the family. What you wore to cover up/protect your gnarly toes and show some respect, I suppose.

You ever done one of those moccasin crafts? I did one when I was an Indian guide and I treasured those things.
https://www.wildernessawarenes...w-to-make-mocassins/

You can get more elaborate and expensive, but the basic ones pictured at that site are what I'm talking about. Let us know if you try it.