Start off with a tug-of-war game that illustrates how unlikely the success was of David vs. Goliath. Then watch the animated video, The Beginners Bible Series: The Story of David and Goliath, to learn about the story. Length of video watching is about 23 minutes.

(Note: In 2015 they re-released this series in four volumes on DVD, this video is found on the Beginner's Bible Vol. 2 DVD.  It also appears to be available on YouTube.)

Do: Greet your students warmly, welcoming them to the video workshop. Introduce yourself and have the Shepherds introduce themselves.

Say:  Today we are studying a Bible story of a small person vs. a large person

Ask: Has anyone heard this story before?

Can anyone tell me anything they remember about the story? (accept a few responses)

Say: That's right, it's the story of David and Goliath. This is a well-known story because David was very small boy, but he battled a soldier named Goliath, who was very, very big. In fact, look at my friend, {name of person playing Goliath} here. He’s a big guy. It would be like one of you against him! You know what, let’s give it a try!

Ask: Who thinks they can play tug-of-war with {name of person playing Goliath] and win? Who wants to give it a try? 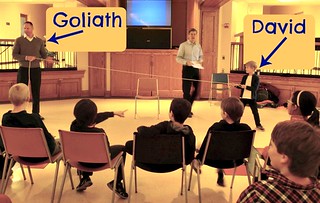 Do: Play several rounds of tug-of-war with a child (or a group of children) vs. "Goliath." (See YouTube video for an example of how to make it work.

Ask: As you conclude the tug-of-war, thank {name of person playing Goliath} and say, “That was tough, I wonder if anybody could beat him?”

Say: Today we will watch a video that tells us all more about this story of David, when he was a young boy, battling a very tall man named Goliath. But David is not alone in this battle – David believes that God is with him and will help him face Goliath.

Ask: Before we start the video, does anyone remember learning another story about David, way back in September? (in September, the “anointing” of David as king)

Say: Last fall, we learned the story of David being chosen as king of Israel.
Ask: Who can tell me what happens in that story? (allow a few replies)

Say: We find our story in the Old Testament, in the book of First Samuel.

For 2nd grade and up:

Have them turn in the Adventure Bible to the second page at the front entitled “About the Old Testament Books.”

Ask: Who can find First Samuel in this list? [Refer to the easel; point out how “1 Samuel” is a way of writing “First Samuel.”]

Ask:  Can anyone tell me what collection these books of Samuel are in?

Say: It is important that these are in the collection of “History” books because they tell us about the history of God’s chosen people who were known in those days as the Israelites. First and Second Samuel include stories of about how Samuel had a part in the Israelites becoming a nation ruled by a king. The first king was named Saul. [Refer to Saul on the easel list.] We’ll see king Saul in our video.

Do: Have the students find I Samuel, then find chapter 17, verse 1 and tell them this is where the story of David and Goliath is told in the Bible.

Say:  We'll use our video to tell our Bible story, however, do read it at home this week.

Say:  Let’s take a look at what we are going to see in our video.

Ask the Shepherd to distribute the snack; meanwhile introduce the characters in the story.
Refer to the “Things to watch for” list on the easel.

Say:  I have a challenge for you today: when you first see one of these characters on the screen, yell the characters name.

Ask:  Do you think that you are up for the challenge?

Who do you suppose this is? [refer to the image paused on the video of Jesse with David's three older brothers]

Say: Jesse! There is Jesse, David's father! Okay, that one was too easy. Let's see if you can watch for one of our other characters. I wonder who we'll see next?

START the video at the designated place.

[Hopefully someone shouts: "David!" as he appears in the first few seconds of shown video.]

[Someone may notice "King Saul" at about 3 and a half minutes into the video, ok to skip this view if not noticed.]

Do: When someone shouts "Goliath" PAUSE the video.

Ask: What is scary about Goliath? (allow all answers - he is large!)

Why didn’t David go to fight the Philistines and Goliath? (considered too young)

How do you suppose King Saul and the Israelite army felt about Goliath?
I wonder if you’ve ever felt threatened by something scary?
What did you do?

Say:  Let's see if see if David decides that he could face Goliath and not be afraid.

Do: Restart the video.

Do: When someone shouts "King Saul," PAUSE the video.

Ask: Why is everyone laughing at David? (they don't think that he can fight Goliath)

Why do you suppose David is not afraid to face Goliath? (accept all answers)

Do: Restart the video

PAUSE after David has armor removed and he says, “God’s help is all the armor I need.”
Ask: Did you hear what David said?
Say: Let’s listen to that again.
REWIND a short amount, to where David falls over from weight of armor, and restart the video.

STOP at end of video.

Say: Everyone was afraid of Goliath. He was huge!
Ask: What are the chances that David could battle Goliath with just small stones and his sling?
Why was David so certain that he could beat Goliath?
[Remind them of the part you listened to twice: “God’s help is all the armor I need.” David felt that his greatest tool was his faith in God.]

Have everyone close his/her eyes.
Say: Think about something that is scary for you – a giant that you face.
[Pause to allow everyone to visualize his or her giant.]
Say: Would it help you to face that giant if you had faith like David had? Picture yourself facing your giant and singing, “I have a giant of a God, bigger than the trouble in front of me.”

Have everyone open his/her eyes.

Ask: What does it take to have a faith like David’s? (accept all answers: reading the Bible, learning from Sunday’s Cool, learning your others, praying, even experience with giants!)

Say: Trusting God to help us face our giants can be hard. The experience David had trusting God to protect him from lions and bears, taught him to trust God when faced with a giant like Goliath. This week, as you face giants in your life, remember that God loves you. God is with you, helping you face your giants.

Ask for any prayer requests. Ask if anyone would like to lead the group in prayer. Be prepared to say a prayer yourself, working in prayer requests. Use the Lord’s Prayer as the ending. A suggestion: “Dear God, sometimes we are afraid and discouraged. During these times we are comforted by your love. Help us trust that you will be with us wherever we go. Thank you for always being with us to face our giants. (End with the Lord’s Prayer) Amen.”

If you have extra time:

Say the key verse with the students: “Be strong and courageous. Do not be terrified; do not be discouraged, for the Lord your God will be with you wherever you go.” Joshua 1:9

Have the group plan a different way to “act out” or show each part of the verse – showing arm muscles for be strong, voice inflections, etc. Practice the verse several times, using the motions agreed upon.

Resources for the Video Lesson:

If you use this material, even in a modified form, please include the following reference: Hulbert, Carol and Chris Nelson. "David and Goliath: Video Lesson." Rotation.org. 2015. Web. Place URL where lesson found inside angle brackets<>.

A representative of Rotation.org reformatted this post to improve readability